Atom Town Book 2: The Hands of the Swamp! 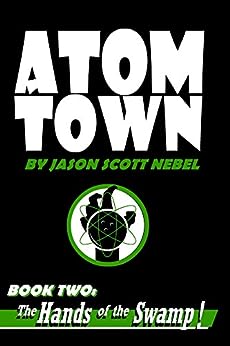 THEY EXPECTED HIS ARM TO GROW BACK…
THEY NEVER EXPECTED THE ARM HE LOST WOULD WANT REVENGE!

In this second installment of the Atom Town series, Doctor Adam Townsend faces a murky end, and the only one who can save him is the one person who can’t stand him, Secret Agent Eve Adams. But can she survive Adam’s blunders, alligator infested waters and the Creeping Crawling Terror of… THE HANDS OF THE SWAMP?!

ATOM TOWN
Atom Town is a Comedy-Adventure Book Series that sends Secret Agent Eve Adams back in time to 1958 where she teams up with the arguably insane Doctor Adam Townsend to unravel the mysteries of a town that shouldn’t exist!

For fans of Comedy, the Atomic Age, and B-Movies!

“Even Better Than the First Book!”

JASON SCOTT NEBEL lives in Omaha, Nebraska with his wife, four sons, and several furry, four-footed children. He lives on a steady diet of cheesy movies, classic TV and Film, and more cartoons than anyone ought to admit to. View all posts by atomtownbooks