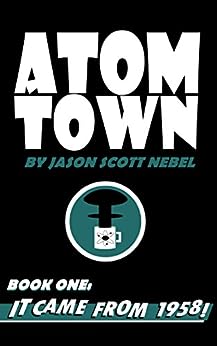 In this first book of the Atom Town series, Eve sees monsters around every corner, but the real terror is the one monster she doesn’t see!

Eve Adams is sent into the past to solve a murder, but what she finds is a world immune to logic and science, a world of Monsters, Mayhem, Mysteries and Murder! The world of the diabolically incompetent Doctor Adam Townsend!

“A comedic book series for fans of cheesy B Horror Movies, Mystery Science Theater, and Svengoolie!”

JASON SCOTT NEBEL lives in Omaha, Nebraska with his wife, four sons, and several furry, four-footed children. He lives on a steady diet of cheesy movies, classic TV and Film, and more cartoons than anyone ought to admit to. View all posts by atomtownbooks